Name :- Bhawana Thing
Age-22 ,   District – Bara, Religion – Christian
Family members:-Father/mother, Number of Brother -5 sister -2
Education-Never been to School.
Background –She is Christian Uneducated back ground . She has big family and everybody depend on labor  work (carry stone, brick, sand ,mud to the construction side and receive daily wage and arrange that money basic need, is called labor  work  Jayme work in Nepal) if there is no strike day and not sick. She never been to school  so she can’t do anything because every where only educated person get chance but uneducated  person never,  they get that hard work labor work because it didn’t need education only strength, so she want to do something and earn money to fulfill her basic need and want to help her family too.

Name :-Fulkumari Rai
Age:-35 , Religion:- Hindu District:-Rautahat,
Family  Members -Father,5 sister,1 Brother
Education -class 10,
Background- she is Orphan  Hindu background. In Nepal  Hindu religion village ladies can’t get chance when they become orphan because every duty and responsibilities should follow and she has no mother so she and her sisters should do all  things as a mother so she should have to break her study. so she wants to join RTDC and want to do and earn some.

Name :-Fulkumari Rai Age:-35 , Religion:- Hindu District:-Rautahat,
Family  Members :-Father,5 sister,1 Brother
Education :-class 10,
Background- she is Orphan  Hindu background. In Nepal  Hindu religion village ladies can’t get chance when they become orphan because every duty and responsibilities should follow and she has no mother so she and her sisters should do all  things as a mother so she should have to break her study. so she wants to join RTDC and want to do and earn some. 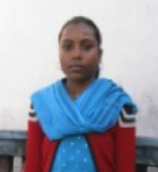 Name:- Mala Pariyar,Age-15,Religion:- Hindu,
District:-Mahotari,Family:-Father,Mother,Brother
Education:-Class 3,
Background-She is from low caste ,Hindu background.  Nepali People called Damai to this caste .In Nepal only this caste’s duty/profession/occupation  is to sew cloth. Specially in Hindu religion and culture high caste people never eat anything and  drink water  from this people. if this people went to high caste people’s  home they should live outside the door they can’t enter high caste people’s home inside. They did not use and touch  anything’s if they touch and in emergency period if low caste people touched high caste people and any things  ,they should spray gold touched  water all over then they will get clean and purify. This is bad culture and we know in our Christianity we are only not low and high caste only male and female. her parents  is alcohol drunker. She is low caste, uneducated and poor so she was working other people home. so she wants to join RTDC and get self depended. 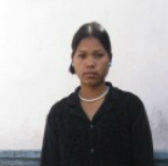 Name:- Manju Chaudhary Age-21,Religion:-Christian,
District:-Dang, family :- 1 Brother ,
Education:- Never been to School,
Background-She is Christian orphan, poor and uneducated background. she has no father, no mother only 1 brother and herself. Both were working as a labor work and she herself is doing all things /duty/responsibilities as a mother and father for her small brother. In Nepal most of the children depend on their parents but those who  have no parents they their self do all things. if she  was educated she will get job ,she never been to school, labor is their work /occupation. so when I hear from her I also feel bad. I felt that we (RTDC USA and NEPAL ) are doing some things to glorify his name and to serve his people. Praise the Lord. So sewing is better and easy  income source and way to fulfill her brother and herself.

Name:-Manu Chaudhary ,Age-20,Religion  :-Christian
District:-Dang, family:- 2 2 person
Education:- class 10
Background – She is  Christian poor background. She has 22 family members. Its to much big family I never hear before. Nobody have job and their income source is labor daily wage. How can manage these much people? So she can’t get complete her study school leaving certificate( S.L.C.).She wants to join RTDC then want to earn to fulfil her needs and help to other family also. 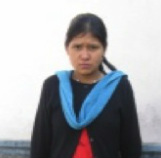 Name:-Purna Maya Shrestha,Age-18Religion  :-Hindu
District:-Sindhupalchowk Family:- 5  person,
Education:- class 7
Background-She is Hindu poor background from remote village.She can’t complete her study  because of her financial problem.her father is village carpenter and mother is working as a labor. It  also can’t fulfill their daily life so she break her study.She wants to  join RTDC and to do some things. 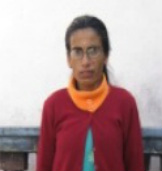 Name:-Ramba Raut  Age-40  Religion  :-Hindu,
District:-Lumjung  family:- 7person,
Education:- class:- 7 Background –She is Hindu,orphane,divorced from her husband background.She married before 10 years.But her husband bring other  younger wife which is illegal .while she was pregnant ,she can’t give her husband  alive child birth (death birth).due to this small issue  her husband bring other wife and give her divorced.In Nepali society people accused for this lady and looked bad sense ,rejected and hate to this kind of women.so she was living her parents home.But in her parent’s home her brother and brother –in-low and family  also looked bad sence when merried ladies return back again.she has no father so she feel she is rejected from her husband,family why iam in this world? If she is educated lady she can get job also but she is  divorced  uneducated women ,So if she get some vocational/income generating  training she her self manage her daily and basic need and she can depend her self. 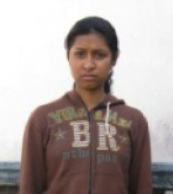 Name:-Sachita Kapali Age-17 Religion  :-Christian
District:-Lalitpur  family:- 4
Education:- class :-9
Background-She is also Christain  poor background.Before caming RTDC she was working small hotel  as a helper like pot washer,and cleaning ,we called it here Vhatti.when she get some ruppe she mange her basic needs.she can’t get chance to go ahead for complete her study.because her father mother also working as a labor.so she came to join RTDC and want to raise up her self and financial status. 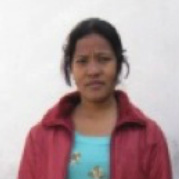 Name:-Sunkasari Rai  Age-28 Religion  :-Christian
District:-Rautahat, family :- 8 person
Education:- class 5,
Background-She is also poor and uneducated christain background family.She has also big family and everybody has no job .main income source is labour work and daily wage.She also can’t get any opportunity because she is also uneducated.so she wants to do some thing for her and her family doing sewing to fulfil her needs and her family.